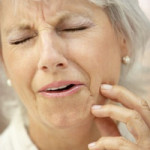 If you have a cut that is bleeding on your leg, you put a plaster on it, but many people do nothing at all when they have bleeding gums. Bleeding gums can be a sign of gum disease and we encourage all our patients to be aware of the signs and symptoms of gum disease and to arrange to see a dentist in the event that they notice bleeding from the gums. With gum disease, it’s important to treat the condition as early as possible, as it can become more advanced quickly.

The ins and outs of gum disease

Gum disease is a very common oral disease, which is caused by harmful bacteria, which release acids that irritate the gums. The most common signs of gum disease include bleeding gums, swelling, tenderness and soreness in the gums and redness. Many people first notice the warning signs of gum disease when they notice blood when spitting after brushing their teeth.

What should I do if my gums are bleeding?

If you have sore, swollen or bleeding gums, call us and book an appointment as early as possible; it may be nothing to worry about, but if you do have gum disease, it’s best to treat it as early as possible to save you from suffering and reduce the risk of permanent damage to your mouth. With gingivitis, good oral hygiene at home and an intensive cleaning treatment from your dentist or dental hygienist are usually sufficient to eradicate symptoms.