Jan 9th, 2013 Choosing Your Dentures In London W1 Get in touch 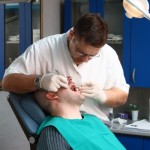 Dentures have taken some stick and abuse over the years, often justified because of how poorly they were made. But that is also a tad unfair, because by having them fitted, it meant that the bite of the mouth remained true and it stopped the face from sagging and bringing on early signs of facial ageing. But it truly is a different story today in London W1. In days of yore, a dentist would generally remove teeth because of gum disease, which is why a good many generations ended up with full dentures. But treatment and understanding of gum disease has reduced the amount of tooth loss and so more and more teeth are being saved, which has seen a big increase in partial dentures being worn. These obviously stay in the mouth better, because they have original teeth to cling to. But it’s not only this side to dentures that has improved; the materials from which they are made are so much better, as well as appearing more natural. Being softer, especially in the case of full dentures, they stick around the gums better and with the use of dental implants and stronger cements, they allow the wearer more security, safe in the knowledge that they are going to stay in the mouth